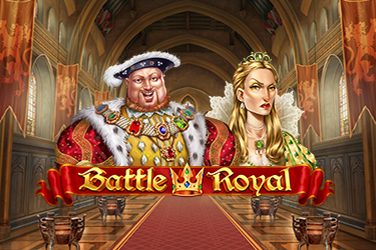 The court of England’s most famous king, Henry VIII, was a jolly place to be as England flourished during the renaissance. Unless you were one of his six wives that is, when things could get very sticky very quickly if you didn’t play your cards right. But have Henry’s days of living large come to an end? He’s on the run from the vengeful ghosts of his former spouses in Battle Royal, and he’s willing to pay handsomely if you’ll help him escape. Could you be the king’s champion and get him out of the castle before the ghosts get him? Let’s take a look in our Battle Royal slot game review.

The main game of Battle Royal is set in Henry’s merry great hall, where torches burn and gaudy red flags line the walls of the cavernous room up to the carved wooden roof. On the reels themselves the low value symbols are the card suits made to look like richly decorated silks, while Henry’s wives make up the high value symbols: Katherine of Aragon, Anne Boleyn, Jane Seymore, Catherine Howard, Anne of Cleves and Catherine Parr. Some suitably regal music forms the soundtrack in the background, while some cartoonish animations add a bit of fun to the game, most notably the guillotine that chops off the wives’ heads!

The mechanics themselves are pretty traditional in this pokie, with five reels and three rows making up the playing area, where you get 20 pay lines and £/$/€100 to bet on each one. There isn’t much else to say about the main game in the Battle Royal slot game because you rarely spend too much time there, and the bonuses are activated by landing just one of the shield scatters. Still, the RTP in this slot is nice and high at 96.56%, so you can be relatively confident of landing some big wins.

Unusually, the majority of the main game play of the Battle Royal takes place in the bonuses, and when you land that shield scatter you’ll be given the choice of two shields, one of which has a pick and win game under it and one of which has free spins. There is quite a little story to these bonuses, so settle down: If you get the free spins, you are allowed to pick one of the six wives to survive the round, and with every spin if a wife lands fully on a reel her head will be chopped off by the guillotine. That wife then becomes a ghostly wild version of herself for the rest of the spins. Once the last wife is left, you get to choose which reel has a guillotine fall on it, and if you guess right and behead the last wife, you progress to an extra bonus round. You also get an extra prize if the last wife is the one you chose at the beginning.

In this extra round you must click on the chests in Henry’s dungeon so the king will open them up. They all contain cash prizes, but one of them also contains a key. If you find the key you and the king escape to freedom and get an extra prize, but don’t take too long, because the ghosts will swoop across the screen and murder Henry if you’re not careful!

We love a good story in a pokie, and Battle Royal certainly has one of those. Backed up with great graphics and some funny sound effects and animations, it’s hard to know whether to root for the wives or the king. It’s certainly more profitable to help Henry win though, and you can win up to 5000x your stake if you set him free!