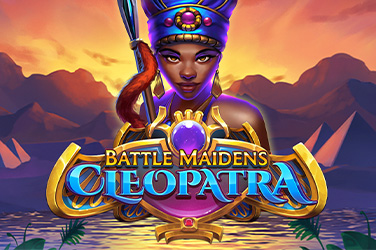 The Battle Maidens are a group of warrior women who come from different time periods. They join forces with the notorious Egyptian ruler Cleopatra to fight in her name and defend their own place and timeline, even if it means traveling back through history itself!

The action is fast and furious in this slot game. You can see Cleopatra herself on the reels, but you’ll also find plenty of other fighters from around the world like Amazonian warriors or Native American maidens! Battle Maidens: Cleopatra offers a wide variety to choose from as well as some great bonuses along with it’s 5-reel 25 payline layout.

The Battle Maidens of Cleopatra have been fighting for centuries, and now it’s your turn. With a battle arena set in the Egyptian sands draped with Sphinx statues, jewelled scarabs, golden ankhs and sarcophagi (and even more terrifying warrior women), you’ll feel right at home among these striking scenes while also being introduced to some new ones!

The graphics are beautiful and the backgrounds change from sun to night, but it’s not just these visuals that make this game special. The music is fun with many little animations as well! The lower value symbols may not be everyone’s preferred choice, but the game still looks great in most cases.

The Battle Maidens: Cleopatra slot game employs a 1024 ways to win feature so you can expect small wins even if the relatively low betting limit of £/€/$25 restricts your big ones. Patience is key in this game, as you seek to build your prize fund rather than hope for a jackpot. Although the Sphinx still offers 50x when it appears on the reels. The warrior women are the wilds in this game, and they’ll play a big role in the bonus rounds, but still pay really well during regular gameplay. The overall RTP is 96.4%, with 10,000x jackpot to chase after!

The free spins are activated by landing one wild and the Cleopatra scatter simultaneously. When you play Warrior Women Wild, every time a warrior woman lands on the reels they activate their own special power that lasts for 5 free spins. Some of these powers include: getting an extra spin, becoming wild and sticky during this round only, doubling your winnings in place of multipliers; as well as expanding to fill up all three slots at once! The Eye of Horus is a scatter symbol that transforms four other symbols into random wilds when it lands.

Battle Maidens: Cleopatra is a slot that uses its bonuses to great effect and makes the theme feel like more than just set dressing. The graphics are great as you would expect and you will be willing the warriors to land giving you some excellent bonus powers.