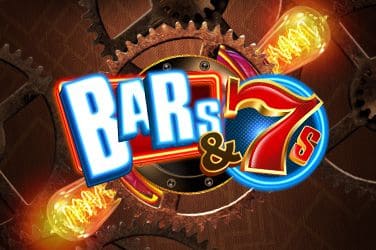 If you asked 100 punters to name a handful of familiar slot game symbols, the vast majority of them would talk about the classic bars and lucky 7s and they remain the pillar of many popular slots on the market.

The Bars and 7s slot game is a nod to those symbols, and its simplistic layout makes for a fun slot that has to be tried at least once.

Bars and 7s pokie appears to be set in some sort of factory, presumably a slot machine factory where there is a surplus of bars and 7s! The USP of the game is that the reels are made up entirely of bars, sevens and blank spaces, and nothing else. This means that, in some spins, you will have one or two empty reels, but that doesn’t detract from the game and, if anything, adds to the charm.

While bars and sevens are two of the key ingredients for a classic slot, a solid Returns To Player (RTP) rate doesn’t go amiss either and it comes in at over 96% which plants it comfortably above the industry average of 95%. We experienced a relatively mild variance of wins between spins, which combined with the very respectable RTP, makes for a high-value slot which will appeal to players of all bankrolls.

One of the slight blots on the Bars and 7s copybook is the skimpy eight paylines that are active during each spin. When you take this into account alongside the fact that most spins feature empty reels, it could leave players scratching their heads as to how they bag regulation wins, but thanks to the aforementioned modest variance, you should enjoy a steady line of wins.

The Bars And 7s aesthetics aren’t anything to get particularly excited about but they’re not that bad either. The bars and sevens themselves have been nicely put together, and while the backdrop itself is perhaps a bit rough around the edges, it’s by no means an ugly design. The soundtrack and spin-to-spin sounds are a nice touch, though, and add an extra layer to the concept.

Something that perhaps lets Bars And 7s down is its bonus features, or indeed the lack of them. We understand that the game’s developers are going for a stripped back theme, but the lack of depth on the bonus side of things will perhaps leave a lot to be desired amongst slot players who love a free spin round. However, players do have a gamble feature they can take advantage of, which gives them a chance to double the win they collected on the previous spin. This can continue indefinitely until you lose, or when the player decides they no longer want to risk their rewards.

We can see the green shoots of a fun concept in Bars and 7s but there are a couple of blind spots that prevent it from going up to the next echelon of slot games on the market. The game is screaming out for some additional bonus features, while the lack of additional playing symbols could be seen as a bit of a turn off for some players. But that said, a solid RTP is a solid RTP, so this is sure to be a strong-value slot for those players who keep a beady eye on their bankroll.