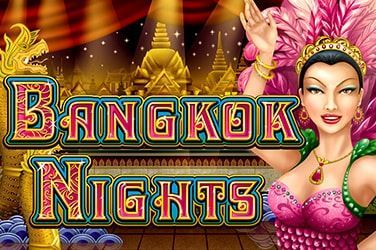 Bangkok is notorious for its lively nightlife, and whether you’re living it up with the tourists on Khao San road or you’ve found a cool dive bar in an out of the way spot, there are all kinds of ways for you to have a good time in Thailand’s capital. Bangkok Nights is a love letter to that fun and excitement, paying homage to the entertainers and characters who make the city’s culture what it is. Not many people come away from Bangkok with more money than when they started, but thanks to this pokie that lucky individual could be you! Let’s find out in our Bangkok Nights slot game review!

There’s something pleasingly retro about the way this game looks, and while it might look a bit like bad graphics to some, it puts us in mind of those 16-bit arcade games you used to find in cinemas so it’s obviously a conscious choice. The background to the reels is decked in gold in traditional Thai style, and while the skyline is a silhouette of the famous shimmering pagodas that pepper Bangkok, a pair of traditional Thai dragons flanks either side of the reels. The symbols all reflect the tradition of entertainment and shows in Bangkok, and the high value ones include various showgirl accessories such as jeweled earrings, feathered masks, top hats and show tickets, while the lower value symbols are the standard 9 – A.

The actual gameplay in Bangkok nights is very traditional, with a standard five reel and three row layout combined with a scatter and a wild that take the form of a nightclub door and a dressed up showgirl respectively. One thing to write home about is the betting limit, and you can place wagers up to a massive £/€/$500 across the 20 pay lines, so high rollers should definitely have fun! The RTP is a little low at just 95.1%, so you’ll definitely want to bet high in order to take advantage of those wins you do get.

There are a couple of simple bonus features to help you make your fortune in this game, and while neither are that complicated there are still some excellent wins to be had. First up there is the Pick and Win feature, which is activated when two bonus symbols land on the reels, allowing you to choose between them for a prize. There is also a free spins round activated by landing three of the nightclub scatters on the reels, which grants you 12 free spins during which all the wins you receive will be tripled in value. That’s a heck of a prize when you’re betting near this game’s enormous limit!

The Bangkok Nights slot game is a pokie that’s very much like its subject: You really have to go hard or go home, just like a night out in Bangkok. There are amazing prizes on offer for those who embrace this slot and bet big, and there’s not much to be gained by sitting on the sidelines!