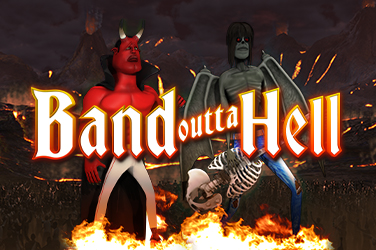 Everyone has a different level of love and perhaps even tolerance for hard rock music and that’s understandable given how divisive it can be. Will this Band Outta Hell slot game review reveal a similar result.? Let’s find out.

This Saucify pokie opens up with a nice 5×3 reel layout that immediately sets out the tone for the theming – and that tone is intense. There are 40 paylines to try and work your way through in addition to plenty of themed symbols, including the vampire band member, Frankenstein band member, betting band member, jukebox and more.

The return to player (RTP) percentage is something that most punters keep a close eye on even if they don’t directly engage with it. The same will be true for many who play Band Outta Hell with the reported RTP here coming in at 96.90% which is pretty high, although some sources report it being as low as 95.95%. In addition to that we’ve also got medium volatility which could lead to smaller yet ultimately more consistent wins.

In terms of the theming, they’ve stuck with it brilliantly in the gameplay. The soundtrack is awesome, the characters function really nicely and the atmosphere is exactly what you’d expect from a game of this nature.

The devil band member is the wild symbol here and can replace all other symbols outside of the scatter/free spins, which is the skull.

Expanding Wilds – landing wilds on the 2nd and 4th reels will lead to them expanding during the free spins feature, and from there, you could create some pretty nice winning combinations.

Random Wilds – one musical instrument is chosen as a random wild during the free spins feature with all wins being doubled. Also, the random wild stays wild for the resulting spin.

Our Band Outta Hell slot game review has officially come to an end and to be honest, there isn’t a whole lot to dislike here, the theming isn’t going to be to everyone’s taste, but it’s an entertaining game and Saucify can be proud of that. With Band Outta Hell pokie there is a clear objective and a clear target audience with plenty of room for growth.