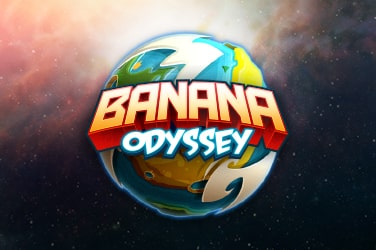 What do you get when you combine the thrill of monkey fun with outer space? You get something that is equal parts ridiculous and hilarious, of course.

Today, courtesy of Microgaming, we’re going to be producing our Banana Odyssey slot game review to see what this pokie is made of.

We open up with a solid 5×3 reel layout against the backdrop of outer space, immediately hooking us into the theming. There are just 10 paylines to work your way through but to make up for that, there are plenty of themed symbols to go alongside the standard playcards. These include the Astro-chimps Buck and Chip, the Astro Nuts and the Banana Blaster.

The return to player (RTP) percentage is regularly seen as a pretty important factor in the world of slots by the majority of punters, and that’ll be true for some who play Banana Odyssey. The RTP for this one comes in at 95.80% and when you combine that with its low volatility, there are plenty of reasons to question this game from the outside looking in.

You only have to put down $€£0.10 to get started with this slot before working up to a tasty maximum of $€£400. From there, it’s actually possible to win up to 400x your initial stake – and we’re all in on that idea.

The soundtrack is fun, the pace of the gameplay is enjoyable and the overall design work has been done in a way that doesn’t allow the idea to go too over the top

The Banana Planet is the wild symbol here and appears on the 2nd, 3rd and 4th reels. It can replace all other symbols on the board – outside of the scatter, of course.

When the BP wild appears the Expanding Wilds feature comes into play, whereby the wild symbol transforms into a wild reel.

Then, the wild reel is held in place with a free respin following shortly afterwards. If the process is repeated and you land another wild, that’ll also expand, with up to three respins being available.

There’s also the Free Spins feature which is triggered upon landing a Free Spins scatter symbol on the 2nd, 3rd and 4th reels. That’ll give you 10 free spins with any other BP wild expanding too, and the wild reel also remains locked throughout the feature.

Unfortunately, there are no retriggers, so take what you can get the first time around.

Our Banana Odyssey slot game review has come to an end and, to conclude, we think this is a well-designed slot that has a purpose and achieves it in some style.

Perhaps there could be a bit more emphasis on the entertainment side of things with a couple more bonus features, but in reality, there aren’t many reasons not to give this one a go.