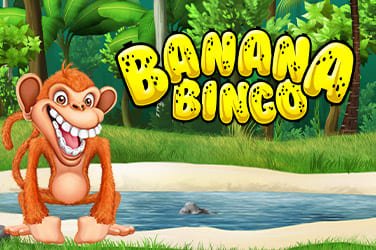 Banana Bingo is a fun bingo slot game from Caleta Gaming and one that will have many going bananas when they play it!

This game utilises some wonderfully bright and colourful imagery and visuals, which can suck and draw players into the game.

The game’s background sees players outside of a jungle, where they will be able to see a rather cheeky-looking monkey in the middle of the screen. The images used add to the overall experience, as it helps to keep players as relaxed as possible whilst enjoying a classic game.

Banana Bingo will provide players with a typical bingo experience, as they are provided several different cards in which they will need to try and knock off the numbers that are placed on them. Each round will reveal a total of 30 balls.

To win, players will need to either get a full house and tick off every single number from at least one of the cards they have, or they can form one of the possible winning patterns.

There are not many symbols available in this game, largely because numbers are used in bingo; however, there is one special feature that players will want to see become active.

A bonus pattern is key in triggering the Banana Bingo bonus feature that Caleta Gaming has decided to implement within this wonderful game.

If players can form a win that includes the bonus pattern, they will be taken to a new screen where they will participate in the ‘Monkey Adventure Bonus’ game that has been included.

Players will need to select a monkey to begin with, which will then climb the tree and try to collect as many coconuts as possible. These will then correlate to the number of lives they will have for the feature.

Once this has been done, the next stage of this Banana Bingo bonus will begin, which will require players to simply click on the bananas. You must be careful when playing this feature, as you can lose lives by selecting the wrong ones. Indeed, once you run out of lives, the game will end.

The final Banana Bingo bonus feature available is a progressive jackpot, but players must have all 4 cards to trigger it!

If you want to enjoy a bingo-style slot, then Banana Bingo is a top title from Caleta Gaming that can be rather enjoyable and potentially rewarding. While the game can be simple to enjoy, adding the bonus feature and a progressive jackpot is a huge plus and things bettors should be looking out for!

If you like the Banana Bingo game, why not try Banana Rock or Bingo 75?