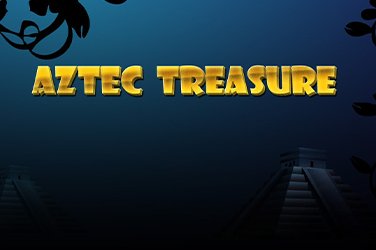 PlayPearls has attempted an Aztec-themed slot game with its Aztec Treasure title, and we have to admit, it is a very good attempt!

The visuals that have been used by PlayPearls when creating this game are of the best quality, as players will feel that they can immerse themselves in the action.

The game’s background is beautifully designed, as players can see a clear blue sky behind a playing grid that consists of golden Aztec-themed tiles. Think about what it would be like to visit Machu Picchu and the abandoned Incan Empire. If you do, you will then be able to enjoy the setting that has been provided in this wonderful game.

The said playing grid has been kept relatively simple, as players will find 5 reels and 3 rows in which the icons can fall, including a total of 25 paylines which can all be identified to the sides of the grid.

This Aztec Treasure slot also does a good job of making sure players continue to experience the best possible moments via using Aztec-inspired symbols. The paytable includes the rather conventional royal playing card icons, but it also features several different objects that can be associated with the genre. These objects include things such as the sun, masks, and headpieces.

So, if you take the ‘Treasure’ part of the title’s name literally, you would imagine that Aztec Treasure bonus features are waiting to be triggered, right? Thankfully, there are a couple that can be activated!

The first is via the game’s wild icon, which is depicted as the game’s logo. This can substitute for all regular icons available on the paytable and help form winning combinations where possible.

Additionally, the game’s scatter – a rather interesting snake-looking icon – can help to provide players with some of the biggest wins possible when they can land 5 of them on the reels.

Lastly, a bonus symbol has been designed as an Aztec temple, which will activate the final Aztec Treasure bonus feature. This bonus is a free spins game, and at least 3 of these special icons are needed to activate it.

Once triggered, players must choose the number of spins they want and the win multiplier for the duration of the round. Make sure to read all about the rules of the chosen decision to fully understand what can happen.

Aztec Treasure by PlayPearls could be an underrated game by many, as the developer has continued to produce some rather exceptional slots over the years, with this one being another top title. The bonus features are a huge plus, whilst the graphics and visuals also help make this game fairly attractive and appealing to the eye.

If you like the Aztec Treasure game, why not try Aztex Palace or Amazing Aztecs?