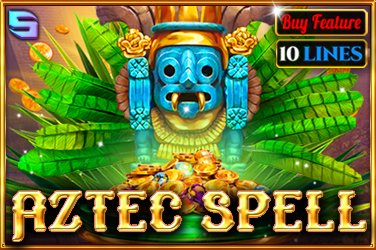 Spinomenal’s Aztec Spell 10 Lines slot game is a title that will capture a player’s imagination immediately as they enjoy this fun game!

Let’s begin with the game’s theme, although that might be obvious given the title. Indeed, this Aztec Spell 10 Lines slot takes inspiration from the Ancient Aztecs, with many of the visuals and drawings based on this popular genre.

We briefly mentioned the playing grid, but you will want to know that Spinomenal has adopted a traditional format. They have utilised a playing grid consisting of 5 reels and 3 rows, as well as 10 paylines (again, perhaps obvious because of the title’s name).

When you look at the paytable on offer, the Aztec themes shine through, as players will find several symbols that resonate with the theme. While they include the playing card royals, they also feature many animals from the region and a very important man.

A host of different Aztec Spell 10 Lines bonus features are available to trigger in this slot, so let’s get cracking!

The first that players will encounter is the countdown wilds. Whenever this symbol appears on the playing grid, the reels will restart to spin but will countdown until it reaches 0. These icons can only appear on reels 1, 3, and 5.

The next Aztec Spell 10 Lines bonus feature is courtesy of some mystery symbols that can appear on the playing reels. Once the reels stop spinning, a random regular paytable icon will be revealed. This could potentially end up creating a winning sequence.

A free spins Aztec Spell 10 Lines bonus feature can also be triggered! This feature requires players to land 3 or more scatters to activate it. A wild symbol will expand to cover the entire reel and remain locked for the duration of the bonus. Players will have five options to choose from when the game begins!

The final Aztec Spell 10 Lines bonus feature requires players to land 3 or more bonus symbols on the playing grid, and if they do, they will then be presented with a wheel with 3 layers to it. This wheel will then be spun 3 times and provide players with multipliers, free spins, or the ability to level up. The level-up feature will allow players to move up to another tier on the wheel, where the prizes are bigger.

If you want a highly enjoyable Aztec-themed slot, then Aztec Spell 10 Lines from Spinomenal is a good place to start. Packed with many different bonus features, players will find each round very different and as enjoyable as the last!

If you like the Aztec Spell 10 Lines game, why not try Almighty Aztec or Aztec Palace?