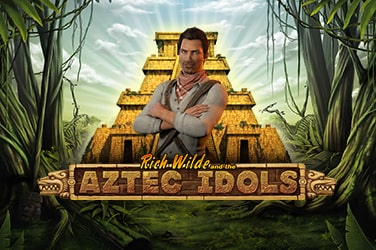 The Aztec theme has been through some absolute classics and some absolute stinkers over the years but we tend to think if you get the fundamentals right, it’s hard to get the overall game wrong.

With that in mind, it’s time for our Aztec Idols pokie game review as we take a look at Play’n GO’s exciting effort with the return of the almighty Rich Wilde.

We open up with a nice 5×3 reel layout that dominates the entire board, but it does so in a way that also allows for some creativity in the backdrop. There are 15 paylines to work your way through alongside a whole host of themed symbols, including four gorgeous decorative masks as well as themed versions of the playcards.

The return to player (RTP) percentage is an important bit of pokie information regardless of whether or not you personally invest in it, and that’ll also be true for Aztec Idols. The reported RTP here comes in at between 96.65% and 96.76% which is pretty decent, and with high volatility, there are plenty of high rollers out there who are going to be interested in this.

There’s a layer of confusion surrounding the official stake figures in this one but we believe the minimum is $€£0.15 with the maximum being a tasty $€£75. What we do know, though, is that winning 5,000x your initial stake is definitely on the table.

The designers have stuck within the theme, they build a sense of occasion and atmosphere and they don’t go too over the top. With all of that in mind, it’s hard not to enjoy Aztec Idols’ design work.

The one and only Rich Wilde himself is the wild symbol here with the golden pyramid being the bonus – although it only appears on the 3rd, 4th and 5th reels with a sunstone scatter also being present.

Pick The Idols – if you can land three of the golden pyramids on the final three reels you’ll be taken to the mini-game screen. Here, you’ll have a number of idols and all you need to do is keep picking them until you find the poison gas, with the majority containing prizes.

Sunstone Free Spins – The sunstones will appear on the 1st, 3rd and 5th reels but if you can land them on the same spin, you’ll trigger the feature.

There is a central sunstone spin that will decide how many free spins you’ll receive, as well as which symbols act as an extra scatter – all for the purposes of winning you more money.

Our Aztec Idols slot game review has come to an end and we have to say that we really, really like this slot.

The bonus features are fun, the gameplay is smooth and the theming is easy to follow.