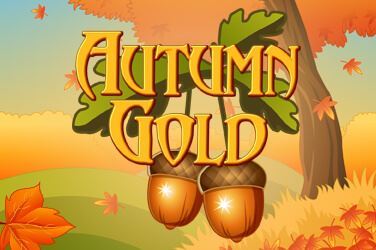 One of the best things about being a pokie player is that there is a game out there for just about everybody, so whatever you fancy there is almost certainly a game to match. The trend is for games that are getting ever more complicated and epic, but if you just want a relaxing way to while away an afternoon and pocket a bit of cash, there are also options for you. Autumn Gold is one of those options, offering simple pleasures that celebrate the beauty of the season without taxing your nerves or your patience too much. But is this a slice of relaxation or just too slow to enjoy? Let’s take a look in our Autumn Gold slot game review.

The name Autumn Gold is taken pretty literally in this game, because it really does feel like everything has a golden orange sheen to match the leaves on the trees. The background is a magnificent tree shimmering in the evening sun against a blustery looking background of golden bushes and green grass, while the symbols on the reels are also in a range of Autumn colours: All unique, the symbols include a squirrel with a nut, a fat pumpkin, an umbrella, a pair of gumboots, a jar of jam and a pair of toadstools. It’s all very picturesque and heartwarming, which is a novelty in a slot these days!

Autumn Gold just has three reels and three rows, meaning there are nine pay lines to play on, where you can bet a maximum of £/$/€45. This is slightly more restrictive than a five reels lot, but it does mean that the action is slightly faster, and there’s the added benefit of having to match fewer symbols to hit those top prizes! That top prize isn’t enormous at 1000x your stake, but it’s easier to land and it can land on any spin, so you actually stand a decent chance of having it come up. The RTP is a little low at 95.4%, but be persistent and you can upset the odds with some big wins!

Unusually for a game this simple there is actually a free spins bonus round and a pick and win bonus to play for! Land three of the Autumn leaf symbol to get eight free spins, which will all attract a tasty 3x multiplier. You can even re-activate this game up to 15 times within the free spins, meaning there are up to 150 spins to play for. Land three umbrellas and you’ll also get to play a prize pick game, where you can pick between them to find a prize worth up to 111x your stake!

Autumn Gold is a simple, easy going little pokie that has all the charm and advantages you’d expect from an uncomplicated three reel game, but with the added kick of some unexpected bonus games on top. The free spins are a great addition, especially with that 3x multiplier, and a pick and win is always a fun way to top up your prize money.