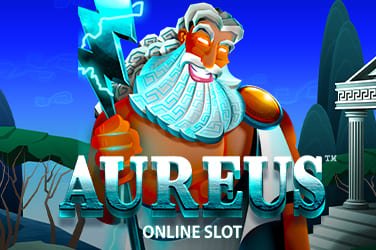 The Latin title of this slot loosely translates to ‘golden coins’ which players can hope to land in this Crazy Tooth Studios, Microgaming powered slot. Jupiter, the Roman god of thunder stands over this interesting game with cash prizes, multipliers and symbol upgrades available that add a spark this visually simplistic slot.

Aureus plays with an uncommon game mechanic we will try to explain here.

A simple, cartoon backdrop positions players on the top of a mount Olympus-style peak with a dark green foliage and some great examples of Roman architecture with a columned temple and podium. Above the podium stands Jupiter, king of the gods complete with flowing, white robes and a lightning bold shaped staff that demands authority.

The grid on which play takes place here is made up of 5-rows and 3-reels that float with an opaque background making it appear light and airy. The symbols consist of variously designed coins with different numbers imprinted on them, they can also include features that come into play during the bonus rounds.

Wins are not achieved here by making paylines, instead coins fall into catchment areas the values of which can be claimed by landing brackets either side of this area. The brackets position between two metallic balls that are suck above and below each coin.

The respin and lightning features are the key to reaching the maximum payouts on Aureus, they are triggered at random. When a respin is triggered at random players get a free shot to spin the reels which can possibly include some rewarding symbols.

The area between the brackets remains active throughout these spins calculating the new payout from each spin. This feature can also be retriggered up to 8 times giving even more chances to win prizes.

Another randomly triggered feature is Jupiter’s lightning that strikes when a closing bracket lands on the grid. This adds an opening bracket on the same row automatically forming a win of whatever is between these brackets.

Although you could complain the design is almost identical to the common Greek god setting this game mechanics on display here are truly of their own. It may take a couple of spins to get comfortable with how it works however once you have the random bonus features and coin values are sure to make a fan of any player.

Check out our slots page for a huge selection of games including Centurion and Fishin Frenzy.