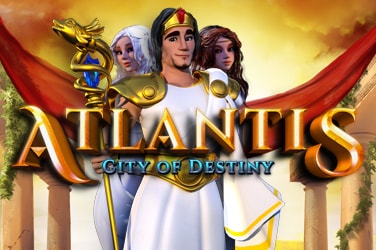 The great city of Atlantis has been dramatised and reimagined in so many different ways over the years, and today, we’re going to see what kind of product Inspired Gaming has produced in our Atlantis: City of Destiny pokie game review.

We open up with a nice 5×3 reel layout that gives the board, as well as the design work, plenty of room to breathe. There are 20 paylines to get through here alongside a parade of themed symbols including a large temple, the game’s logo, a golden cup, crossed swords and a ship.

The return to player (RTP) percentage is so often looked upon as a controversial part of the slot experience, but many players who test the waters with Atlantis: City of Destiny will be very interested to hear that the game’s RTP comes in at 96%. Between that figure and the fact it has low to medium volatility, we’d say punters have some big decisions to make.

The gameplay is a bit rigid and that can’t be ignored but in a general sense, we do like the theming they’ve gone for here. They’ve attempted to add a string of different elements into the mix and even though it doesn’t always pay off, we can see the direction they’ve gone in and we appreciate that.

The fireball is the wild symbol in this game with the male character serving as the bonus symbol.

If you can land three of the bonus symbols on the 1st, 3rd and 5th reels, you’ll roll a dice to determine which one of the following three features you’ll get to use.

Fortuna Spins – spin a wheel to reveal the number of spins, multipliers and an extra wild that can be used in a round.

Atlantis Wild Spins – four spins with two wilds are added to the reels.

Pathway to Riches – work your way up the steps in a ‘picking’ game, earning some nice prizes along the way.

The Lady of Atlantis may also award one of the following features during your spin.

Gigantic Reel – adds a 3×3 symbol onto the reels.

Wild Winner – adds wilds for one spin and guarantees a win of 6x your stake.

The Atlantis: City of Destiny slot game review is at an end and, to conclude, we think this is a decent enough slot that’s worth trying out.

It isn’t likely to blow you away in what we all know to be an incredibly crowded field, but what we do think is that they’ve put their best foot forward in with nice design work and a whole lot of bonus features.