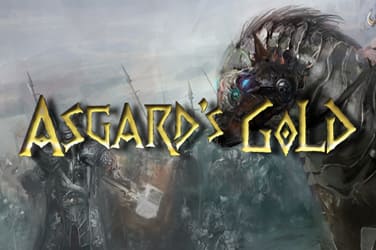 We will look to inform potential players of how the slot is played, what the RTP (return to player) rate is, and if the Asgards Gold Bonuses (wild symbols, free spins and random bonus features) means you’ll have the chance of winning some top prizes.

One of the most popular themes for online slot games for quite some time now has been the Norse and Viking gods. They were seen as powerful and mighty figures, being both wise and imposing. The Avengers films have brought into this mythology as well, as can be seen with the popular character Thor.

This take on the theme is brought to us by PlayPearls. While they might not be a household name, by taking one look at Asgards Gold you can see that they know how to design and produce a great looking slot game. There are a lot of bold colours here, with the background and symbols in particular really standing out.

As mentioned earlier in this Asgards Gold Slot Game Review, the symbols are mainly based around Norse mythology. The symbols with the lower value are the standard 10, Jack, Queen, King and Ace, while the Viking Gods such as Loki, Freya, Thor and Odin are the higher valued symbols, which players will be keen to match across the reels.

The wild symbol is the city of Asgard, and will replace any non-winning symbols to help players make winning combinations.

PlayPearls have been wise enough to build into this slot a number of fun Asgards Gold Bonuses that players will be looking to trigger. The Viking helmet acts as the scatter symbol, and landing three of these will grant players five bonus spins.

Then there are the random bonus features, with each God representing a different prize. Loki will give you some mystery stacked symbols, which will then all turn into the same symbol, for extra winning combinations. Thor will transform all symbols with a low value into wild symbols for one spin. Freya will add between thee and five extra wilds across the reels, and finally Odin can transform a whole reel into a set of wild symbols.

The RTP rate is 95.47%, so a little lower than most slot games we’ve seen recently.

It certainly isn’t another run of the mill Viking style slot game. PlayPearls have clearly put a lot of time into creating an enjoyable experience from start to finish, which include the well designed background and symbols, through to the Asgards Gold Bonuses. We highly recommend this slot game.