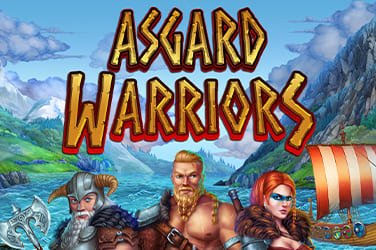 Created and developed by 1×2 Gaming, Asgard Warriors is a slot game that will immediately appeal to players who enjoy Norse-themed slots!

Asgard Warriors is a slot title that focuses on the Viking theme, with players able to immediately immerse themselves within this historical period that has proven very popular.

The graphics, it could be argued, are not the best. However, they portray the theme rather well, which is all that matters for some. Players will immediately recognise that they are in a beautiful area of Nordic land, as they will be able to see a mountainous area with plenty of greenery while there is a beautiful pool of crystal blue water and a wonderfully blue sky.

This Asgard Warriors slot game is played on a grid of 5 reels and 3 rows, thus making the entire gameplay experience rather easy and enjoyable. This grid also allows for 243 ways to win, which is reasonable.

Again, the symbols on the paytable could have been done with a little more regarding the detail and graphics used, but it is clear that they fit the theme perfectly well, too. Whilst they include the obligatory royal playing cards, they also offer objects that can be associated with the Vikings, as well as character icons which are Vikings.

It is worth pointing out that there is a couple of Asgard Warriors bonus features possible to trigger when playing this 1×2 Gaming title.

The first of these bonuses is via the game’s wild symbol, which is shown as the Viking’s longship. This icon will act like many other wilds that can be found, with it being able to substitute for all regular paytable icons and help complete any winning sequences that are possible on a payline.

The next Asgard Warriors bonus feature is the Warrior Spin, which can be activated when a full stack of matching character icons appear on reel 1. Once this happens, you will notice that only character icons and wilds will appear on the reels after that for that respin.

The Asgard Warriors bonus feature is the free spins game. This will only be triggered when players land 3 or more of the skull icons. This scatter is crucial to the bonus, and if you land 3, you will receive 8 free spins. If you land 4 or 5, then 12 free spins will be awarded.

During the bonus, players will also benefit from a progressive win multiplier that will only increase when more skulls land on the grid. The win multiplier will correlate to the number of scatters that appear.

If you like the Asgard Warriors game, why not try Asgards Gold or Asgardian Stones?