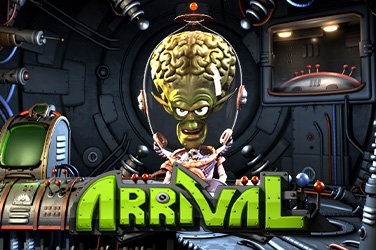 Betsoft has provided us with its Arrival slot game creation, which will have many enthusiasts who enjoy sci-fi themes rather pleased!

As mentioned, this Arrival slot game from Betsoft is based on a sci-fi theme, with many of the drawings and themes used by the developer depicting this particular genre with the background and symbols they have designed.

The game has been set in outer space; the playing grid appears to be encapsulated in some futuristic alien machine, where you can see an alien operating the controls as the reels spin.

The playing grid of this Arrival slot game makes being in outer space a little more comfortable as the developer has opted to use a standard format. A total of 5 reels and 3 rows have been adopted, as have 30 paylines.

The symbols have been given the same great level of detail by the developer, too, with Betsoft opting to make this sci-fi-themed game as engaging and intriguing as possible with each drawing.

On the paytable, you will find a planet with rings, a target aiming at the earth, a space Marine Corps badge, a big-eyed alien pet, a spaceship, a laser gun, an Autobot, a space marine, and a girl who is also a space marine.

Naturally, a couple of different Arrival bonus features are available to enjoy in this slot, so let’s get straight into them!

The first of these Arrival bonus features is a game where players will be required to click on a variety of UFOs to win a prize. Those that can land 3 or more of the ray gun symbols will be able to access this mini-feature and ultimately look to win some potentially lucrative prizes.

The next Arrival bonus feature comes via the Alien, with players who land 3 or more of this rather ugly-looking dude able to turn an entire reel into a wild reel. Additionally, some free spins will also be provided to players on top of the wild reel.

Players who can land 2 or more of the girl icons will trigger the final Arrival bonus feature, which will see individuals have to do their best to save her from the Alien. If they manage to do this, they will be compensated handsomely.

These three bonus features are rather good, and you will be very happy if you can trigger them!

Arrival is a fun slot game and one that will provide players with a great experience whenever it is played, as they will be able to enjoy the visuals that have been created. Additionally, including bonus games will also be something that comes across as a plus, as it enhances the overall experience!

If you like the Arrival game, why not try Space Force or Galactic Girls?