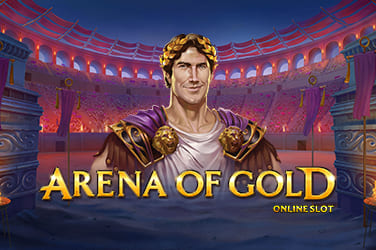 As some of the most fearsome warriors of the Roman era descend upon the stadium, it’s time to take a step back and analyse the almighty Arena of Gold slot game review.

It shoots for being big, bad and epic, and we’re here to tell you whether or not Microgaming has succeeded.

We open up proceedings with a nice 5×3 reel layout against the backdrop of the colosseum which, in itself, makes for a nice gladiator-esque visual. There are 25 paylines to work your way through in addition to the usual playcards and a whole bunch of themed symbols, including competitors in red, blue, green and orange.

The return to player (RTP) percentage is the figure that many of us keep an eye out for in preparation for a new slot and the same can be said for the Arena of Gold. In this instance the RTP rolls in at around 96.20% which is a decent enough result, and with medium volatility, there’s a solid chance of smaller but more frequent wins.

It only costs a minimum stake of $€£0.10 to get started with this slot but if you’re feeling funky, that can be worked all the way up to a nice maximum of $€£50. Oh, and from there, it’s possible to win upwards of 2,500x your initial stake.

This is anything but basic with Microgaming really taking the time to put in some detailed work across the board. The symbols, characters and soundtrack all build up the sense of occasion and leave us feeling totally immersed in this world.

The Emperor is the wild in this one with the Colosseum and the gold coins operating as the special symbols.

Free Spins – if you can land three of the Colosseum scatters anywhere on the reels then you’ll be given five free spins. During this round the 2nd, 3rd and 4th reels will combine into one big reel with symbols that fill up all available positions. From here the giant symbols count as nine standard symbols, with retriggers also being available.

Golden Respins – buckle up, because we’ve got some jackpot prizes on offer. This is first triggered by landing six gold coins that will give you three spins with those coins being locked in place. When there are no more coins or all positions are filled, the amount shown on each coin will then be awarded. If there are three coins displaying matching jackpots you’ll receive either the Mini, Mega or potentially even the Maxi jackpot.

The Arena of Gold slot game review intends to give an honest assessment of this slot, and in our opinion, this is an absolute winner.

They don’t try to go too over the top with the theming, the gameplay is fun and incredibly smooth, and there’s a feeling of grandeur that’s often hard to come by in this industry.