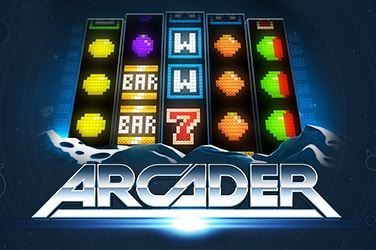 Arcade games are the stuff of legend for many of a certain age who have fond memories of entering worlds of action and adventure with a fist full of loose change and excitement in their hearts. Racing down mine shafts, fighting aliens and defeating monsters were all in a day’s work for arcade warriors, and Arcader is a pokie that celebrates everything cool about the genre. With cool retro stylings and truly original look, this has the potential to hit many nostalgia buttons for players, but will it be a welcome blast from the past or a game to forget? Let’s take a look in our Arcader slot game review.

Arcader has an extremely distinctive look that immediately brings to mind old classics like Space Invaders and Barrier thanks to its starscape background with a 16-bit lunar landscape at the bottom. The symbols themselves are rendered in all of their 8-bit glory, and despite the blocky appearance are recognisable as traditional fruit machine symbols like oranges, lemons, plums and lucky 7s. This slot has a lot of the wow factor to get excited about, and just like a real arcade game it’s all lights and noise throughout as the symbols flash and meteors land in the background. There’s a cool midi soundtrack and a voiceover congratulating you on your success as you play: It’s pure nostalgic goodness.

Arcader is a pretty traditionally laid out slot with five reels and three rows to play on, where you can bet as much as £/$/€100 per spin. The two most exciting symbols are the wild and the expander symbol, which respectively substitute for other symbols and expand to take over the whole reel and set up some great combos. Despite all these goodies the Arcader slot game doesn’t have the best paying symbols, with a top paying combo of 20x your stake for five of the BAR symbols. The RTP is just above average at 96.10%, but you’ll have to do well on the bonuses to get the benefit of it.

Alongside those two wild, Arcader has a free spins bonus activated by landing between three and five of the green Bs on the reels. You get nine free spins no matter what, but activating them with five symbols also gets you a 9x multiplier to play with, which is amazing. A second game is the mystery game activated by landing up to five of the M symbols, letting you pick from purple boxes to reveal cash prizes until you find the red symbol and end the game. Find five mystery boxes to start the game and you’ll do it with an awesome 6x multiplier, which will quickly see you build up a healthy prize fund!

Arcader is a real blast from the past that blows you away with its cool design and fun concept, and while you might wonder what all the fuss is about when you see the main game prizes, the potential for big wins in the bonus rounds can’t be ignored!