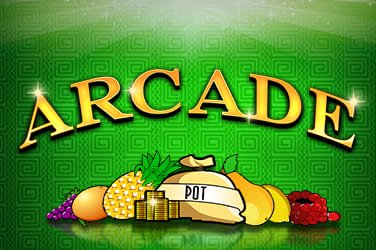 Wazdan’s Arcade slot game will take players back years with what they have provided, but that can be considered a rather good thing.

The game features so many different elements that scream retro and throwback, with the visuals created just one of those aspects. The game utilises a green background that is very basic but is extremely effective, too!

Additionally, the entire gameplay experience provided by Wazdan with this Arcade slot game also just shouts out that we have gone back in time.

The game is played on a 3-reel grid of 3 rows, with just one winning payline. This is the middle row where a combination of 2 or 3 symbols is needed to trigger a win.

Speaking of the game’s icons, those on the paytable represent many of the classic symbols found in the first fruit machines ever created. These include cherries, raspberries, lemons, plums, pineapples, oranges, bells, apples, watermelons, grapes, pears, a Vegas sign that resembles the traditional BAR icon, and a bag of cash.

Whilst the game might be a little basic regarding its design and gameplay, it also comes with two Arcade bonus features that make things rather interesting for any individual who decides to give this Wazdan title a go.

This bonus is known as a mini-bonus and is activated when a star appears on the reels. When it does show, it will switch on the corresponding field in the Mini Bonus Matrix table. If you can fill this table, the Mini Bonus will be added to the overall win achieved when the final star lands.

The final Arcade bonus feature that players can trigger is optional and can appear after every winning spin. Once you form a winning combination on the middle row, you will be given the option to ‘Gamble’.

This feature will allow players to double the prize amount won, although a losing effort will see the player end up with nothing.

Players must pick between two symbols and hope the chosen one shows up. They can play this game seven times in one go, although you would have to keep winning and betting against the amount that has been obtained.

Suppose you want to enjoy a simplistic game. In that case, Wazdan’s Arcade slot game is one of the best titles available, especially for those who want to enjoy a blast from the past regarding the visuals and gameplay experience on offer!

If you like the Arcade game, why not try Starburst or Fruit Collector?