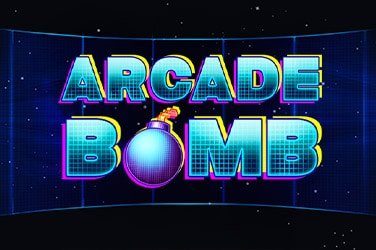 Arcade Bomb slot game is an exciting title from Red Tiger that will allow players to combine retro vibes with modern features!

Red Tiger Gaming – part of the Evolution Gaming group – has provided players with an immersive yet nostalgia-inducing slot game with its Arcade Bomb slot!

This title has adopted what would appear to be a space theme, as the game’s background features a setting that would look similar to one if we were in outer space, as we can see far into the galaxy that has been created.

Additionally, the visuals and graphics used are simple. Still, they remain vibrant and colourful, thus allowing gamers to truly enjoy each of the spins they make when playing this title.

Red Tiger’s Arcade Bomb slot game retains its simple nature via the gameplay experience provided, as players will find that they are met with a traditional slot experience.

The game has 5 reels and 3 rows available to spin and land icons on, with 20 fixed paylines in place.

Despite being of a retro and throwback nature, players will find that this game can still provide them with some modern gameplay experiences as there is one Arcade Bomb bonus feature just waiting to be activated.

The main Arcade Bomb bonus feature to have been implemented by Red Tiger is the explosive bonus feature that can be triggered when a coloured bomb is exploded.

Once the bomb reaches zero, it will explode and create a chain reaction, with each explosion following a specific pattern. It will transform nearby symbols into potential jackpot winners, whilst any bombs that have not exploded nearby will also explode.

The return to player (RTP) rate for this Arcade Bomb slot game stands at 96.15% and comes equipped with a low volatility rating, which is perfect for those who wish to win more frequently.

Arcade Bomb is a top slot game that players will immediately enjoy as soon as they play, with the themes helping to provide a rather fun element. The gameplay is simple, but the bonus feature can make this game rather rewarding!

If you like the Arcade Bomb slot game, why not try Starburst or Retro Galaxy?