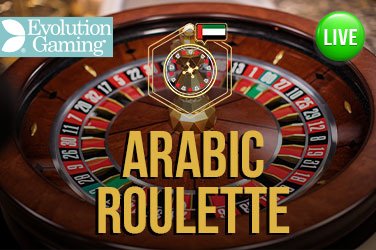 Prolific developer Evolution Gaming seem to be on a mission to capture the entirety of the roulette market, with several major releases in the genre in recent years. One of their biggest innovations has been localized versions of the game, using presenters, rules and designs meant to appeal to specific countries or regions.

The game actually played in the Arabic Roulette slot game is standard European, or French, Roulette with its single zero pocket and lower house edge. As in all of Evolution Gaming’s live roulette games, the experience is augmented by an impressive live menu setup that is subtle, well designed and easy to use. As well as placing simple bets you can also easily place more complex ones like Finales A Cheval with a few clicks, while a handy analytics section provides all kinds of cool information on the last 500 spins including hot and cold numbers and the latest odds on various combinations. As with all versions of European Roulette, this game has an RTP of 97.3%

In terms of the Arabic theme of Arabic Roulette, the most obvious changes are the language and the appearance of the gaming room. All of Evolution’s roulette variations feature riffs on the target country’s identity, like national flags and monuments incorporated in the design, and Arabic Roulette opts for a uniquely Middle Eastern design of earthy tones and complex geometric patterns. Alongside this the presentation is sympathetic to Arabian audiences, both in terms of the fact that it’s presented in Arabic and in terms of the cultural mores.

The male and female presenters are dressed more demurely than their western counterparts, and the style of presentation is careful to avoid falling foul of decency laws in countries of the region. The presenters also follow Arabic gaming customs more closely than would be the case in western casinos, remaining sensitive to the general lack of tolerance to gaming in Islamic societies whilst also facilitating a fun and engaging experience.

While there are no specific bonuses on offer in these games because they are a faithful recreation of classic casino roulette, the ability to play on several tables at once is a benefit that you couldn’t access if you were playing in the real world. This game also has the benefit of being one of the few targeted squarely at Arabic speaking players, with presenters who understand and respect the culture of the Arab world as well as traditional etiquette and social mores, which can help Arabian and Arabic speaking players feel more at home.

As with all of Evolution Gaming’s live roulette options, Arabic Roulette is a slick and well designed take on the traditional game with plenty of well designed and easy to use mechanics to help you have a good time. The Arab specific design, presentation and thematics are a welcome addition to players in and from the Arab world, and an experience that is tricky to find replicated anywhere else. If you’re a native Arabic speaker and you want to play a great game of roulette, this should be your first choice.