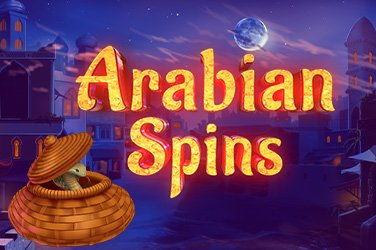 Welcome to this Arabian Spins Slot Game Review. We will look to give any potential bettors the chance to learn the basics, such as how the game works, if the return to player rate is likely to lead to you winning some money back, and if the Arabian Spins Bonuses (which include free spins, multipliers and wild symbols) well increase players’ overall enjoyment of the game.

Booming Games are the provider of this online slot, and they’ve managed to bring us an engaging and well designed game, with the graphics really standing out. Given the name of the game, it will come as a shock to no-one that the background, reels and symbols all look like they’ve come straight from Aladdin.

What is different about this game is that while there are three rows, there are only three reels, instead of the more commonly seen five. This certainly doesn’t take away any enjoyment from the game, instead it can help any players with less experience in online slots get to grips with the game easier, as it is much simpler to play.

Booming Games have certainly paid special attention to making the symbols look great. They include a fez, a Monkey, an Arabian sword and a cobra hidden in a basket.

The diamond is one of the wild symbols. When these land on the reels, they will replace other non-winning symbols, to help players achieve a winning combination

The 7x multiplier also works as a wild symbol, but more importantly is a 7x multiplier! So, landing these as part of a winning combination can lead to a payout.

What kind of Arabian Spins Slot Game Review would this be if we didn’t get round to covering the bonus features? Thankfully, Booming Games have included several here for players to get stuck into.

As well as the wild symbols and multipliers, the magic lamp works as the scatter symbol. By landing three of these, players will be awarded with ten free spins.

Then there is the 2 Way Pay. This works when you have three diamond wilds on the reels, which means you can then make winning combinations of two different symbols. This can lead to some impressive winnings, so players will certainly hope this will happen to them!

There is also a gamble game that can be played after a winning spin, where players will simply need to guess the next card correctly to double their winnings.

The return to player rate for this game is 96.55%, so it is significantly higher than most other slot games.

It might only have three reels, but there certainly is still a lot to enjoy about the simplicity and effectiveness of this slot. There are plenty of Arabian Spins Bonuses for players to enjoy, so whether you’re a novice or a seasoned bettor, you’ll enjoy this game.