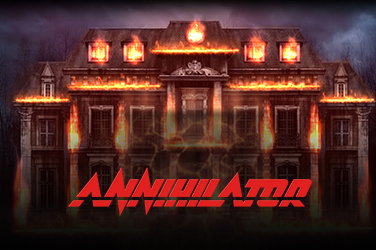 Slot games based on bands can be hit and miss to say the least, with some pokies putting a load of effort into bringing the theme to life, while others coast along on the name recognition and don’t put a lot of effort in. Compared with some of the big names we usually see on slots Canadian heavy metal band Annihilator are a little niche, but fans of the band, the genre and music in general will find something to enjoy in this game. But will you come away with the cash or will your profits be annihilated? Let’s take a look in our Annihilator slot game review.

We were impressed with this pokie from the get go, because the developers have clearly put a lot of effort into the visuals. The background is of a spooky looking mansion wreathed in flames and spattered with blood, while the reels have sharp metal edges and borders that burn as they spin. The low value symbols are the standard 9 – A arranged to look like they’re made of bloodstained knives, while the high value symbols are a combination of classic haunted house icons from creepy weeping statues to electric guitars and a broken mirror with a ghostly face reflected in it. The animations and sound effects are a class apart, and along with the flaming reels and the screeching guitar music the pay lines are lit up in glowing ectoplasm and the wilds are animated clips of the band’s guitarist shredding up a storm.

Despite this pokie’s cool metal credentials the mechanics behind it are fairly traditional, with five reels and three rows as well as 10 pay lines to play on. The betting limit is pretty high, maxing out at £/€/$100 per spin, with a top prize of 40x your stake and an RTP of 96.2%, which is a little above average. If you’re a little disappointed by those payouts then don’t worry, because there are also a couple of bonuses to help boost your pay packet!

The first bonus to talk about is Fun Palace, which is a real performance, triggering an animation that sees you enter the creepy house and watch a variety of cash prizes enter into creepy Raggedy Ann dolls hanging from the ceiling. Despite this complicated setup, the game simply requires you to pick prizes until you land one above 10x, at which point the game ends. A second bonus is a more traditional free spins round activated by landing three scatters in which you get eight free spins to play with, during which those cool wilds can appear as stacked symbols taking over whole reels. Even better, after each spin the wild moves to a different reel and leaves a trail of fire behind it, with every wild that lands in that trail also expanding to take over a reel and behaving the same.

The Annihilator slot game is a bombastic and scary looking slot that captures the energy and theme of the band’s music and drops a few fun and inventive bonuses on you at the same time. The payouts in the main game aren’t great, but that’s more than made up in the prizes you get from the bonus rounds!

If you want titles to annihilate, try out Hugo Goal, Holiday Season, Hugo and Hugo 2.