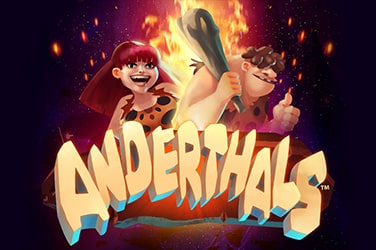 It can’t have been much fun living in prehistoric times, when comfort meant a warm night in your cave and a quick snack took all day for you to lay your hands on but clearly that didn’t mean that cave dwellers didn’t have a bit of fun! This pokie from Just For The Win introduces us to our new favourite stone age family, the Anderthals. All they want is to escape from the prowling dinosaurs for another day and chow down on some delicious ham in front of the fire, but give them a hand and you could get your mitts on some tasty jewels in with the bargain. Let’s take a look in our Anderthals slot game review.

The Anderthals live in a pretty harsh and unforgiving world, which is there for all to see as the backdrop of this slot, which consists of a slightly blurry jungle as far as the eye can see with a background of a dark and gloomy cave immediately behind the reels. The graphics in this slot are cartoonish but very detailed and pleasingly drawn, and the symbols on the reels include card suits carved from flint for the low value symbols, while the high value symbols are images of the cave man and cave woman, the game’s logo, a dinosaur and a flaming branch.

Anderthals immediately looks a little different because it has an extra row, giving this slot five reels and four rows instead of the usual three. This means it has a higher than average 40 pay lines on which you can bet up to £/$/€100 per spin. This slot is one of those that relies heavily on its bonuses for the big wins, but all in all the Anderthals slot game has an above average RTP of 96.12% so there is plenty of cash to be made!

The bonuses in this game hang around at the top of the screen all the time, but you don’t actually get to use them at first. Each spin re-spins the bonus above each reel, promising you things like wilds and multipliers, until two of the flaming torches land on the reels in one spin. When this happens, the bonus at the top of the reels the torches land on is activated for the next spin, so you could easily end up with two or more bonuses active at once, including multipliers, multiplier wilds, expanding wilds and extra wilds to really spice up your combos. The most sought after bonus is the free spins, which immediately grants you eight free spins with whichever bonuses were activated at the same time also in play throughout all the spins. You can even re-activate the spins from within the bonus, really maxing out your potential wins.

Anderthals is admittedly a little disappointing early on, without much in the way of features for a modern pokie despite its great looks. That changes the instant you activate the bonuses, when all hell breaks loose with any number of awesome features activating all at once!