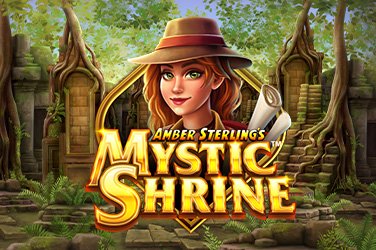 Fortune Factory, a smaller independent game developer has brought us the newest in a growing list of female explorer themed slots. Will it be good enough to compete with eh likes of Cat Wilde?

We see no reason why not with great visual conventions and exciting game mechanics including a randomly triggered bonus reel and fixed jackpots offering up to 5,000x the stake.

This slot plants players straight into the action at a jungle temple with an ancient stone structure bordering the reels. This is marked with interesting patterns and the carvings of a deity, moss grows across the floor and up each of the pillars showing how old this temple is. Either side of the reel and in the background various vegetation can be seen including huge vines, various leaves and plants, to the right Amber Sterling can be seen in full explorer gear. To the left of the reels are the fixed jackpot values in various colours from MINI to Grand, beneath this is a glowing pot of gold left slightly ajar.

The 10 – A of cards are used here as the lower value symbols on the grid, they are designed in various colours that play into the setting quite well, players can receive up to 100 coins form these. The higher paying symbols here include a lantern, compass, elephant and statue of the deity used throughout the design, the latter of which can pay out up to 300 coins. There is also a golden coin ‘WILD’ symbol that substituted for any other main game symbol in play here and a golden, jewel encrusted mirror ‘BONUS’ symbol.

The first bonus feature to mention here is the Action reel, this horizontal reel above the grid can be randomly activated rewarding 1 of 2 bonus features. Firstly, the Marked Positions bonus begins if 1, 2 or 3 flames appear across the Action Reel, this places marked positions on the reels and if one lands on top of another adds a 1x multiplier up to 5x. During this feature the bottom position of reel 3 is always marked. Alternatively the Blazing Wild Streak is activated if a 1x, 2x or 3x multiplier appears on the Action reel. This makes all Marked positions Wild and provides a respin with the Wild symbols sticky, the line win is awarded with position multipliers and the respin multipliers added.

Finally, the bonus game is unlocked by landing 3 of the ‘BONUS’ symbols across the middle 3 reels, this activated a Pick & Win style game. You ae given 12 items to choose from, pick them until 3 match and be awarded the corresponding jackpot prize.

Amber Sterling’s Mystic Shrine it turns out is a really interesting, well though out slot. The look and feel of play is great with rewarding bonus and random features for players to hope for. The returns can be quite lucrative from the main game and the jackpot multipliers only add to this. Amber Sterling could very well compete with the likes of Lara Croft in many aspects here.

Head over to our slots page for a huge selection of games like Centurion or Mermaids Millions.