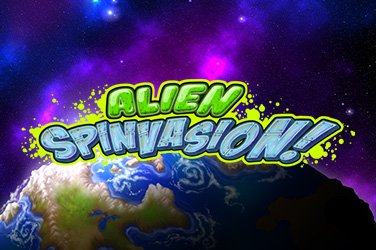 It is time to try and protect Earth from the Aliens who want to destroy it in Alien Spinvasion!

Rival Gaming has adopted a sci-fi theme for its Alien Spinvasion slot, with gamers finding that they are taken out to space to try and combat the attack that Earth is experiencing.

The game features some exceptional graphics and designs, with some vibrant colours and imagery used. Players will see Earth at the bottom of the screen whilst also seeing space coloured in a bright purple.

A playing grid of 5 reels and 3 rows have been used by Rival Gaming for this Alien Spinvasion slot, with 50 paylines.

The symbols available on the paytable include the traditional royal playing card numbers, as well as alien ships, asteroids, ray guns, fruits, rockets, telephones, and Earth; our planet being the most rewarding when five of them appear on a payline.

The first of the Alien Spinvasion bonus features is the free spins game, which can be triggered when players land 3 of the military general icons on the playing grid. Those successful in doing this will be rewarded with a total of 11 free spins!

Next, the expanding wild bonus feature is activated when players land the green alien on the playing grid. If he appears as part of a winning combination, he will stick in place before triggering a respin. This feature can take place in any of the games played in this slot.

Lastly, this Alien Spinvasion slot has a bonus feature known as ‘Drop Icons’. This special will see a red rocket appear in the free spins game, dropping new blocks of symbols. These icons can then help to complete winning paylines!

Alien Spinvasion is available to play for gamers of all budgets, as this Rival Gaming title allows for a vast range of bets to be placed on each spin.

Alien Spinvasion is an exciting slot from Rival Gaming that can provide gamers with a fun and enjoyable gameplay experience. The bonuses available are a positive as they can be rather rewarding when activated, with expanding wilds and free spins potentially making the game provide some rather lucrative prizes.

Of course, with sci-fi themes being highly popular, gamers who wish to have a light-hearted experience with this particular genre will enjoy what they receive with this game!

If you like the Alien Spinvasion slot game, why not try Space Force or Reactoonz?