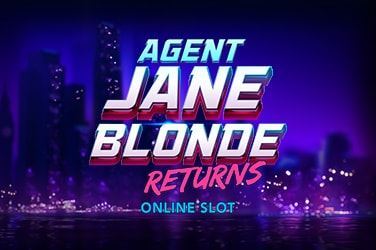 Sometimes the sequel can provide us with something even better than the original, and we’re sure that’s the case with this pokie. Read on in our Agent Jane Blonde Returns slot game review by Microgaming to find out more.

We open things up with a nice 5×3 reel layout, with some developmental improvements made since the first game in the series was released. There are also 15 paylines to work your way through, so make sure you take the opportunity to strike when it presents itself.

There are themed symbols to be found as far as the eye can see in this one, including laptops, watches, money, cars, handbags and passports with four styles for Jane Blonde – stealth, undercover, underwater and classy.

The return to player (RTP) percentage can be incredibly enlightening. Still, it can also send you off in a million and one different direction – such is the unpredictable nature of this business. For Agent Jane Blonde returns, the RTP is between 96.45% and 96.60%, which is decent, even if the volatility is relatively low.

There’s quite the gulf when it comes to how much money you can put down here, with some opting for the minimum stake of $€£0.05 and others going in the direction of a lovely maximum stake of around $€£400. Oh, and you can also win up to 300x your initial stake.

The growth between the first Agent Jane Blonde and the Returns version is extraordinary. It’s quicker, slicker, and feels like something that could be produced as a TV show. It may not be everyone’s cup of tea, but we enjoy it.

Those who enter this world hoping for a wealth of bonus features will be left feeling disappointed as there isn’t the option for any free spins here. Alas, with the face of Jane being the wild and the logo being the scatter, there’s still something to work with.

The respin feature is triggered upon landing two scatters, and in doing so, they’ll turn into wilds before being held in position for the duration of the bonus. Once all positions have been filled or no more wilds can land, the feature ends.

The Agent Jane Blonde Returns slot game review has a simple message about Microgaming’s latest effort in this series.

All of the right pieces are in place for it to succeed, from the storyline to the graphic design work and beyond. It’s worth trying out.