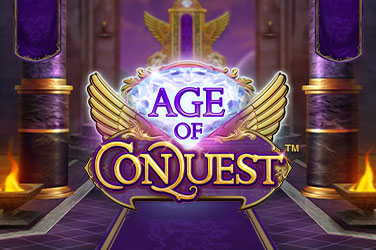 It’s time to equip your best items, stock up on arrows and head for a drink at your local inn, because we’re in for another swords and sorcery treat from Microgaming in Age of Conquest. Pokies set in fantasy worlds are two a penny, and the setting is probably one of the most popular out there, but when a game pops up with so much attention to detail involved we really have to sit up and take notice! So is Age of Conquest a new classic, or would you rather log off than see another elf? Let’s find out in our Age of Conquest slot game review.

The Age of Conquest slot game certainly looks the part right from the get go, transporting the player to an awesome looking realm from days of yore. The backdrop is a gorgeously rendered fantasy castle set among mountain peaks and rolling green hills, while the reels themselves are surrounded by an ornate border that had to have been carved by elves. On the reels the low value symbols are the standard 9 – A drawn in an ornate filigree style, while the higher value symbols include glowing magical objects like censers, swords and shields as well as the mighty looking elven warrior and witch. Accompanying this bombastic imagery are cool animations and sound effects, and a suitably grand fantasy score. Flaming swords flash on screen, fountains of coins spring up and symbols flash and glow as you make winning combos.

Age of Conquest is actually pretty traditional in terms of its layout, boasting five reels and three rows with 20 pay lines to play on, where you can bet up to £/$/€200 per spin. That changes when you start landing the warrior and witch symbols, which can appear normally or in giant sizes of up to 1×3 that take up the whole reel. These are the most valuable symbols, earning you 15x your stake for five of the warriors or 10x for five witches, though the most valuable of all is the wild which pays 20x your stake for five. The overall RTP of this game is 96.14%, slightly above average, hinting at more to come in the bonus rounds.

There are a couple of bonus features to watch out for in Age of Conquest, one of which comes up in the main game and the other of which is a separate bonus round. Picking up diamond scatters in the main game fills the diamonds at the top of each reel, and when both diamond slots are filled that reel will be filled by a stacked wild for two spins. The more of these you activate at once, the more cash you can win! The second bonus to watch out for is activated by landing two of the throne scatters, which offer you the choice between more spins with fewer wilds or fewer spins with more wilds. This ranges from two spins with three wild reels to 25 spins with one wild reel. There’s no right answer, so choose carefully!

Age of Conquest does a great job of sucking you into its fantasy world, and it’s a lot of fun to play when you get there with a couple of nifty game modes and some decent paying bonuses. Your mileage will vary depending on how many wilds you land, but hit a few lucky spins and you’ll hopefully be rolling in treasure!