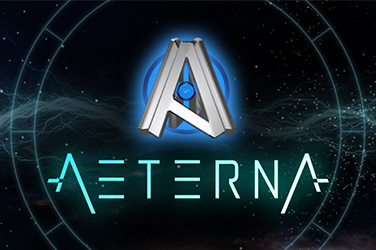 We are blasting off into space, and the Aeterna slot game is your ticket. Smaller designers don’t have access to cutting-edge graphics or movie quality design but innovation comes with their territory as proven with this slot from Black Pudding Games.

Is this space mission a blast off or can the calls of mayday be heard? We take a look in our detailed review below.

Aeterna slots are among the most unique in existence, with three reels that have been upended into a kind of star shape and planets as far as your eyes can see. The background is reminiscent of another dimension; it’s dark but full of stars – nebulas too! The symbols are abstract and look like futuristic versions of basic shapes. The animations and sound effects accompany the visuals as does a thumping modern beat for a soundtrack.

You will have to fight for your place in the cosmos with an almost new set of mechanics. Winning combos are formed by landing three or more symbols next to each other on the outside of a star. The cascading reels mechanic in this game makes it possible for players to create string-wins that can stack and get bigger as more symbols are matched together line by line without interruption. Once any player has landed their winning combo or combos—they will be removed from the board and replaced with new ones giving those next spins even more opportunities for success!

With each win in the main game, you add another 1x to your multiplier. This means that long strings of wins can create a big multiplier on top! The majority of payouts are 2-5X but this is made up for by just how high multipliers go with 6 and 7 cubes – at 1000x apiece. And don’t forget about the overall RTP which sits at 96.19% for this game.

The multipliers are even better when you land up to 6 of the A-shaped scatter symbols. The first is a standard free spins feature, which will be activated for 30 extra spins with 2x winnings on any wins made during this time. That’s not all though – if you happen to hit two separate winning combinations on one spin then at random your second win double value!

Aeterna is a game that will give any player something interesting, innovative and new to enjoy. It offers plenty of different ways to play along with some fun features and bonus rounds where you are given certain tasks in order to win more prizes! You won’t be winning jackpots on this game but both your frequency of wins as well as those tasty multipliers mean it doesn’t matter because your prize fund can still end up being pretty healthy anyway!