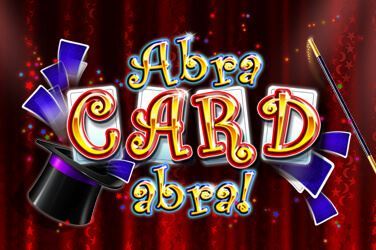 Everyone loves seeing a little bit of magic – even if they don’t necessarily believe in it.

Today, through our Abracardabra pokie game review (yes, we love the name too) we’re going to explore the weird and wonderful world of magic in some more detail.

There’s just one row of five cards to work with here as we delve into the magic element of the gameplay from the word go. The aim is to hold one or more cards in an attempt to win poker hands, sticking with the simplicity that comes with the odd magic trick.

We get to see some familiar symbols across all five of the cards including cherries, lemons, oranges, watermelons, grapes, bars, 7s and more.

The return to player (RTP) percentage is a difficult statistic to measure at the best of times and the same will be true during our Abracardabra slot game review. Here, the reported RTP is said to come in at 95.95% which is below the industry average, but the medium volatility it possesses should ensure some smaller yet more consistent wins.

A tiny little $€£0.01 can get you up and running in this slot before working your way up to a maximum stake of $€£25. Oh, and from that point on, the magic of this game really does shine through in the form of potential winnings in excess of 10,000x your initial stake.

Set against the backdrop of a magician’s curtain, Abracardabra sticks with the idea that we’re at both a magic show and a game show in equal measure. It’s weird, and sometimes the lights are a bit distracting, but we still like it.

Keep an eye out for the Magician’s Hat because that’ll trigger the Magic Hat feature, whereby new cards appear from the hat to guarantee a nice winning combination.

There’s also a Bonus symbol in play and if you land three or more of them, the Abracardabra Bonus feature will be unlocked. Three bonuses give you a 1x multiplier, four give you a 2x multiplier and 5 gives you a huge 10x multiplier.

Seventeen cards are then handed out with the top five card positions being filled up alongside 12 smaller card combinations below. From there, if you get a winning combo, the contributing cards are removed and new cards are shuffled together with the existing ones – repeating itself until there are no possible wins left.

Our Abracardabra slot game review may offer up a picture of something a little bit out there, and we truly do hope that’s the case.

NextGen Gaming has gone out of its way to create an entirely new sphere for slots and what they can accomplish, and we think creating these alternative ‘rules’ will really help the long-term growth of the industry.

The next task will be to really sustain it, and we believe they’re capable of doing so – especially with an entertaining premise, good bonus features and high potential winnings like this one.