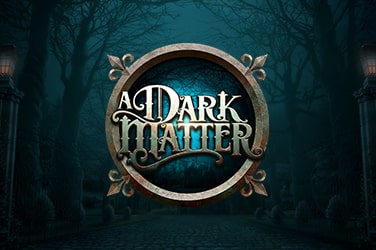 If you’re a real pokie fan or new to this world of slots one thing we can assure you is that you will never get bored, as there are so many interesting themes out there. We’re happy to say if you fancy indulging in something dark and mysterious A Dark Matter maybe the slot for you..

The Victorian theme is clear from the word go in this game, based in a small English town known as Stonehurst. We have a standard 5×3 reel setup to kick things off with punters having just five paylines to work their way through within the gameplay.

The usual playcard symbols are on display within the reels but in addition to that, we also have a string of themed symbols characters to enjoy with the most valuable being the Lord of the Manor.

The return to player (RTP) percentage is regularly pinpointed as an important part of anyone’s slot journey and that’s no different when it comes to A Dark Matter. The reported RTP for this one comes in at 96.18% and while that may not be the highest of figures, it does come with the caveat of having high volatility which is always an exciting discovery.

You only have to put down $€£0.05 to get started with this slot before working up to a potential maximum of $€£50, and from there, winning 2,400x your initial stake is on the cards with the bonus feature – and 1,200x without.

The design work is slick, the theming is consistent and we really like how gritty the slot is. Sure, it can be a bit rigid at times, but we’re willing to power through in the name of entertainment.

The A Dark Matter logo is the wild symbol that can substitute itself in place of all other symbols outside of the door knocker scatter.

When a full wild stack pops up on the 2nd or 4th reels, it will invade another reel and turn it fully wild – known as the Invading Wilds feature, also known as a way to win loads of money.

The main attraction is the Free Spins feature that is triggered upon landing three scatters on the 2nd, 3rd and 4th reels. The doors to Wraith Manor will open and you will begin this journey with 12 free spins. There are no limits to how many more you can win as another scatter landing gives you one extra free spin, and wilds are super stacked on reels 2 and 4 throughout – with a 2x multiplier on each win.

For our A Dark Matter slot game review we’re going to be honest in saying that we really, really like what Microgaming have done here. It isn’t quite the most intimidating slot we’ve ever seen but the gameplay is good, we like the story of the slot and they offer up some big helping hands in the bonus features.

With all of that put together, it’s hard not to recommend this pokie.