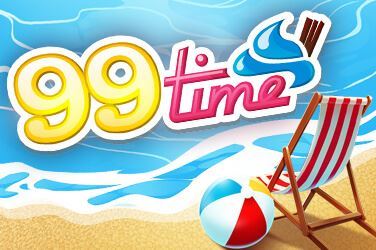 Eyecon have developed an impressive portfolio of online casino games since their formation way back in 1997, and this Australian company have come up with a game that has a very British feel to it.

The theme of 99 Time is the well-known classic cold treat the 99, ice cream flake, and all of the symbols in this game are representative of other ice cream treats.

If you have played one of Eyecon’s previous offerings, then the layout of the buttons will be familiar to you, with the control panel being similar in layout as in their other offerings.

The five reels and three rows offer up to 25 paylines, and the number of paylines you can have can be set by the user prior to betting. The reels themselves are set to a background of a beach scene, with golden sands, breaking waves and a striped deck chair, and a distant silhouette of a funfair on a pier can be seen in the distance.

The game offers a Return to Player percentage of 95.3 and the maximum and minimum bets with all 25 paylines active equates to $12.50 down to 25c, which works out at 1c or 50c per line.

The symbols in this game are represented by other ice cream snacks such as choc-ice, ice cream cones, ice cream sandwich and the obligatory 99 flake cone.

As you would expect, the 99 Flake symbol is the most sought after when playing the base game, and you will receive 5,000 coins if you are lucky enough to land five of these on a payline. Meanwhile, the scatter symbols in this game is represented by the ice cream van and ice cream man symbols, and any winning line this appears on will double your winnings.

There are two bonus games included in 99 Time, free spins and ice cream pick. Free spins are activated when you get three, four or five ice cream van symbols on a payline and depending on how many you get you will receive either 15, 20 or 25 freebies. Plus, these free spins can be re-triggered, which can lead to some big wins as all winnings during the free spins round will be tripled.

Another scatter symbol is the ice cream man, and if you land three you will be taken to the ice cream pick prize round. For every ice cream man symbol, you land, you will get given one pick of an ice cream symbol, with each one containing a multiplier of different values up to 100x.

99 Time is a game that has plenty to offer, and the chance to win big is something that will appeal to casual gamers and more experienced casino slot game users alike. Eyecon has delivered a game that looks good and plays well across all devices such as tablets and smartphones, and with the low maximum stake, this is one game you can play without worrying about your bank balance.