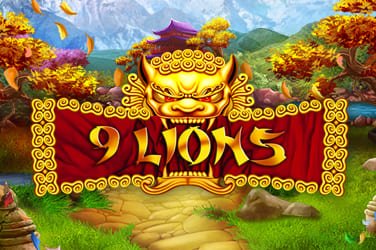 Go on a magical trip to China with this awesome 9 Lions slot that is rather unique, and experience something different than before!

Wazdan’s 9 Lions slot game provides gamers with a wonderful take on Oriental culture as they have provided gamers with the ability to enjoy a slot that is rich and golden.

Taking inspiration from China, the game features what appears to be a temple of some kind that holds the playing grid inside. Several bright and vibrant colours have been used to bring this game to life and make it as visually exciting as possible.

The game is very simple to enjoy, as this 9 Lions slot consists of a 3×3 playing grid that does not have any fixed paylines attached to them. It could be suggested that there are 9 reels, as each symbol appears in its own grid. The way to win in this game is to land 4 or more identical symbols anywhere on the grid!

Speaking of the symbols, a host of them are available on the paytable. These include traditional playing card royal icons and a dragon symbol (the only one to pay when 3 appear), followed by the black turtle, the white tiger, the vermilion bird, and the azure dragon in brightly coloured circles. Lastly, the golden lion is the main symbol of this game, as it is the most rewarding.

A host of 9 Lions bonus features can be found in this Wazdan game, each providing some rather good opportunities to win big!

The first of them is the locking symbols feature that can happen randomly. At the end of any spin in the game, a symbol can be randomly locked and remain static for the next spin. The feature is made all the more exciting as players can pick the symbol they want or add to it while removing the lock option.

The next 9 Lions bonus feature in this title is the Lion Bonus, which is a mini-game that can be played when the reels spin. There is an empty playing grid of 3×3 to the side of the main grid, and each time a golden lion appears, it will be placed on that grid in the same position. If it becomes full, 9 lion bonus free spins will be ready to obtain. However, to do that, a player must land a further 3 golden lions anywhere on the reels in a single spin. Once this is achieved, they will have 9 free spins to enjoy, where at least 4 lions are needed to win a prize!

The final 9 Lions bonus feature is the Dragon Bonus, with the golden dragon symbol required to activate this special game. Players will already know that landing 3 of these will provide a prize, but if they do it across the middle of the playing grid, they will then be able to pick from three eggs where they will receive the prize that has been hidden inside!

This 9 Lions slot game has a return to player (RTP) rate of 96.59% and comes with a variance level considered medium volatility.

The game can be played with a variety of different bets, with the minimum being $/€/£0.20 whilst the maximum wager possible to place on each spin is as high as $/€/£100!

With a plethora of different bonus features available to trigger that can be rather rewarding, 9 Lions slot by Wazdan is a beautifully-designed title and one that will make players truly feel the Oriental culture that inspiration has been drawn.

If you like the 9 Lions slot game, why not try 5 Lucky Lions or 88 Lucky Charms?