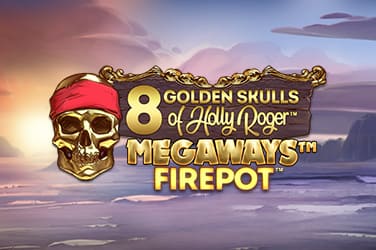 Buck Stakes Entertainment are the founders of this pirate themed Megaways slot, their first slot release to date.

All of the usual conventions are involved here with seafaring characters and bandana-wearing skulls ride aboard this Jolly Rodger of a slot. Let’s just hope you can find some pirate gold and net be made to walk the plank in this buccaneering online slot release.

The developers carefully crafted the graphics and sounds of this game to provide a well-rounded experience. As you play, it is easy to get drawn in by how aesthetically pleasing the visuals are while catchy music plays through your speakers. The Firepot Scatter Jackpot is what makes this game really stand out from all others and the game mechanics are pretty entertaining also.

The symbols used as you venture across choppy waters in search of treasure include the lower value 10 – A of royals. As you more into higher paying symbols you will be greeted by 5 female pirates pf which the highest payout for the purple-clad pirate will return a maximum 60x your bet. Fans of Wild symbols will be disappointed here as they are not included in 8 Golden Skulls of the Holly Roger. However, that is not to say there aren’t bonus features available through symbols like the Golden skull, the Treasure chest or the diamond Scatter.

With a bet range varying from NZ$0.20 up to NZ$20.00 there is chances for a good return here, especially with the 6 game jackpots available through landing up to 8 Golden Skull symbols. The slot works from 4 rows and 6-reels with a ‘rolling reels’ feature in play meaning winning combinations are replaced with new symbols offering even more chance. The Megaways gaming mechanic offer player sup to 117,649 possible ways to land a winning combination in this exciting slot. That much possibility added with an RTP (Return to Player) of 96.86% and a high variance is enough to get players excited with what is on offer here.

Along with the ‘rolling reels’ there are another 3 bonus features players can enjoy during 8 Golden Skulls of the Holly Roger. The trademarked Firepot feature of Buck Stakes Entertainment, it revolves around the Golden skull symbols which rewards a multiplier of bet stake return. The possible pay outs can be seen to the right of the grid with up to 2,000x for a maximum 8 Golden skull symbols. The free spins come into play when 4 of the diamond Scatter symbols appear on the reels at the same time, this will reward a random number of spins and multiplier based on the bonus wheel result. With a maximum of 30 free spins and a 3x multiplier along with an extra 2 spins for each additional diamond Scatter that lands with the starting 4 and an extra 4 spins by retriggering the bonus. There is also a Treasure chest symbol which can substitute for any other symbol awarding bigger payouts.

Along with the playful, pirate theme and great bonus features the main game itself has a lot to offer here, the ‘rolling reels’ are always a welcome addition also. The bonus features that are available really offer the big payouts with the free spin multiplier possibly working alongside the Firepot feature there is huge potential here.

Head over to out Megaways page for more great games like Anubis Wild Megaways.