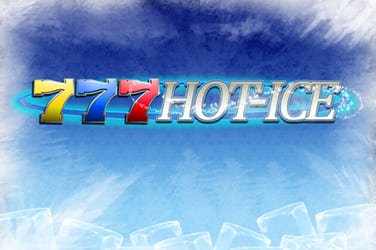 In this 777 Hot Ice Slot Game Review, we will give potential players and bettors an insight into how the game is played, the RTP rate and if the 777 Hot Ice Bonuses (which include free spins, a wild symbol and a bonus round) make the game both enjoyable to play, and likely to return money.

The 777 Hot Ice Slot Game is another title from Playpearls, and like many of their previous games, this slot is well designed, with an attractive background and symbols that really stand out, especially with the 3D graphics. For those of you who are new to online slot games, this could be a great place to start, as it is very simple to play.

Before setting off, players will need to select the number of paylines they wish to use. You can only bet one coin per line, but the value of each coin has a range from $/€/£ 0.10 to $/€/£ 2.00, so the game can appeal from those who have never tried online slot games before, to the more seasoned amongst you.

Like many classic slot games, 777 Hot Ice has five reels and three rows. The aim here is to match the same symbols across the board, with three, four or five of the same symbol resulting in a winning combination.

We find a lot of well known symbols here, such as lemons, cherries, watermelons and 7s, all in bright and bold colours. Each has a different value; the cherries are worth the least, with five matched across the reels giving players a winning of just two coins. It is the coloured 7’s that players will look to land, as five of these can result in a payout of up to 200 coins.

There is also a turquoise free spins symbol to look out for; land three, four or five of these will give players eight, fifteen or fourty free spins respectively. These can land anywhere on the board.

It wouldn’t be a very thorough review if we didn’t cover the 777 Hot Ice Bonuses on offer. Thankfully, Playpearls have included some here, giving players the chance to win some big payouts.

The wild symbol will substitute out non-winning symbols, to help players make winning combinations. The only ones it won’t replace are the free spins or the bonus symbols.

There is a bonus game, which is unlocked when three bonus symbols are landed at the same time. It will take players through to the Unfrozen Cash Bonus screen, where bettors have the chance to win a top prize.

The return to player rate for the 777 Hot Ice Slot Game is 97.07%, which is slightly higher than average.

Playpearls have given us another well designed and fun slot game here. It is relatively simple, but the 777 Hot Ice Bonuses means there are ample opportunities for some great prizes to be won.

So, the conclusion of this 777 Hot Ice Slot Game Review is that players of all experience will find something to enjoy here.