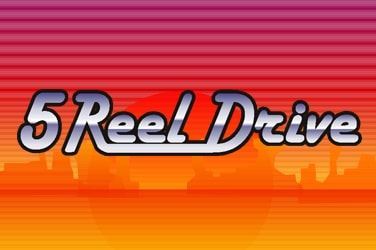 It seems like the trend is for pokies to get more and more complicated with the addition of new game modes, new rules, better graphics and more immersive stories, but sometimes all you want is a quick flutter on the reels for a chance of winning some cash! Luckily there are still games out there like 5 Reel Drive which can cater to that need, and provide a fun gaming experience without all the complications. But is this a stripped back masterpiece or is it just too simple for words? Let’s take a look in our 5 Wheel Drive slot game review.

5 Reel Drive is a pokie that celebrates the freedom of the open road, where the horizon is limitless and anything is possible. That feeling seems best summed up by the great freeways of America and the cast of fun characters that use them, who are all depicted here in this slot’s cartoonish graphics. On the reels you get a trucker, a free-wheeling taxi driver, a glamorous young woman in a sports car and a load of different fast foods you’d find at a truck stop along the way like coca cola, burgers, fries, pie, coffee and donuts. It’s far from the most sophisticated game out there, but the addition of some tyre screeching sound effects and police sirens as you play captures the mood pretty effectively.

When we say that the 5 Reel Drive slot game is simple we really mean it, and it’s about as stripped back as they come. There are five reels and three rows to play on, with nine pay lines and a maximum bet of £/$/€90, while there is no bonus round at all. Before you get too carried away though, there are upsides to this, mainly that a game with no bonuses has to give all its cash away in the main game, which is exactly what happens here. 5 Reel Drive has some very generous payouts in the main game, with the top six symbols paying out 600x, 700x, 800x, 900x, 1000x and 10,000x your stake respectively for five in a row, which is way more than most other games. To put it another way, you’re never more than one spin away from 10,000x your stake, which is hard to resist! No wonder the RTP is above average at 96.35%!

There are a couple of fun extras in the form of a wild and a scatter, which substitute for other symbols and pay wherever they land respectively, but there are no separate bonus games to play.

5 Reel Drive shows its age a little in terms of the design, but you’ll struggle to find a pokie that’s as straightforward to play as this one while still being very rewarding in this day and age. Big prizes, simple rules and nothing to get between you and the cash, it’s got to be worth a spin, right?