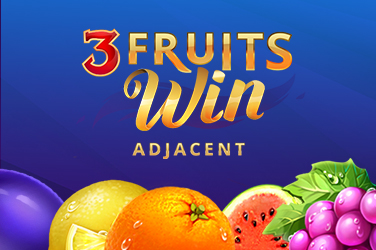 Veteran developers Playson seem to have an unstoppable mission to completely corner the fruity pokie market thanks to the volume and quality of their output, and 3 Fruits Win: 10 Lines is just the latest in a huge amount of fruit machines they’ve made. With games from just about every possible genre and boasting most of the major game mechanics you’ll find, is there a reason to play a slot whose main selling point is having 10 pay lines? Or are there bigger fruits to munch on? Let’s find out in our 3 Fruits Win: 10 Lines slot game review.

While Playson has got a lot of similar slots on the market, you can’t argue that their output doesn’t look fantastic, and 3 Fruits Win: 10 Lines is just another of those great looking games. There’s a deep royal blue background to the reels, while on them you have all of your favourite fruit symbols such as oranges, cherries, watermelons, plums and lemons. You’ve also got the lucky 7, the bell and the star thrown in for good measure! The art is fabulous in this game, and everything looks like it is an oil painting, with tiny droplets of water welling on each fruit to make it look as juicy as can be.

The title says a lot for the 3 Fruits Win: 10 Lines slot game, because you’ve got five reels and three rows to play on with 10 pay lines, on which you can bet a maximum of £/$/€100 in one spin. The highest paying symbol in the main game is the lucky 7, which pays 250x your stake for three, which works out at a cool £/$/€ 2500 if you’re betting the maximum on the 10 pay lines – not a bad return for one spin! And remember, this game pays the maximum for just three fruits, so it’s all the benefits of a three reel game with the extra reels of a five reel game!

You already get a pretty good deal with the ability to generate maximums using just three symbols, but there is one other benefit you get in this pokie: Stacked symbols. Any symbol can appear stacked in 3 Fruits Win: 10 Lines, and if you manage to land the lucky 7s as stacked symbols then you’re on course for a very tasty pay out! There is also a star scatter that appears in this game, and while it doesn’t activate any bonus games it pays 50x your stake for three of them and you can land them anywhere on the reels to get a win, not just in a line.

3 Fruits Win: 10 Lines is another solid fruit machine slot by Playson which marks another feather in their cap on the way to fruity world domination. The mechanic that allows you to win with three symbols instead of five is a fun one that can lead to some great wins, and we always appreciate the effort that goes into their visuals.