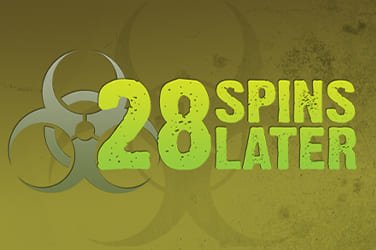 In this 28 Spins Later Slot Game review, we will look to inform players on the value of the different symbols, and if the 28 Spins Later Bonuses (a wild symbol and free spins) are enough to help make the game both enjoyable to play, and to help gain some great winnings.

Many of you will be aware of the popular zombie film 28 Days Later, which is where this slot gets its title from. If you are a fan of that genre of films, this really is the game for you. Playpearls have produced a game which captures the spirit of the film, with a background that looks like a graveyard, and with symbols such as zombie faces and weapons such as shotguns, axes and chainsaws.

It is set out like many slot games, with three rows and five reels. Players will look to match three, four or five of the same symbol across the reels. There are 20 unique paylines, with bettors able to select how many they wish to play with. The paytable and help button will help to explain these features for anyone who is new to online slot games, but it should be relatively straight forward.

There is a good range of attractively designed symbols that players of the 28 Spins Later Slot Game will look to match. The lowest value symbol on offer here is the First Aid Box, which will give players a win of ten for landing all five across the reels. They then increase in value, with the green skull being the most valuable. This offers players a payout of 30 coins if they land all five.

Now the part of this 28 Spins Later Slot Game Review that you’ve all been waiting for, the bonus features.

There is a free spins symbol, which can reward players with up to 40 free spins. There is also a wild symbol, which will replace all other symbols on the board (except the free spins) to enable players to make winning combinations

While there aren’t any extra bonus rounds or games to speak off on offer here, we do feel that the free spins and wild symbols mean that the 28 Spins Later Bonuses will help players to achieve some solid returns.

The return to plater rate for this 28 Spins Later slot game stands at 90.81%.

It certainly isn’t a game for the faint-hearted, with its gruesome symbols and general spooky background & theme. But even if you aren’t a fan of the films, Playpearls have given us an enjoyable title here. With the free spins and wild symbol, players have a chance to earn some good winnings when playing the 28 Spins Slot Game.