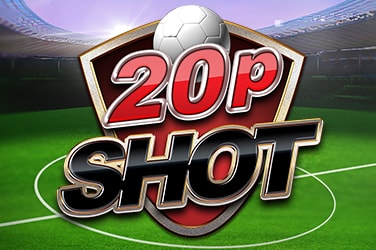 Just about every country in the world that has pokies has a genre dedicated to easy playing, low stakes versions that are fun and engaging without being too risky. In the United Kingdom they call them 20p machines because of the maximum bet, and that’s exactly the kind of experience that 20p Shot Slot is trying to capture.

We might be on dollars and cents rather than pounds and pence here, but the ethos is the same: A fun and exciting game that won’t break the bank, this time based around soccer. But will this be a low stakes wonder or is it just dull? Let’s take a look in our 20p Shot Slot game review.

20p Shot Slot is themed around international soccer as it was released around the time of the last World Cup, and features some of the world’s top soccer nations on its reels. The background is an image of a traditional soccer stadium on a perfect summer day, while the symbols are all soccer balls overlaid with images of the flags of France, England, Germany and Brazil. These are the low value symbols, while images of players and medals are worth more, and the silver and gold trophies are worth the most!

One of the hallmarks of a 20p slot is that it’s easy to pick up, cheap to enter and easy to play, all of which the 20p Shot Slot game manages handsomely. There are only three reels and three rows with five pay lines to play on, but you can bet a slightly larger sum of £/$/€150 in total if you want, with a minimum of £/$/€0.20 as the title suggests, so you can make it as risky or as tame as you like. It’s also a little easier than normal to land those top combinations because there are only three reels and three rows instead of the usual five, so it’s not all bad to be smaller! Having said that, the RTP is low at 95%, so you’ll be relying on those big scores to make you rich!

The jackpot in question is a real winner though, so it’s definitely worth going after: 50,000x your wager on a single spin. There are no bonus rounds so you don’t need to jump through any complicated hoops to reach the maximum prize, just land that one lucky spin and hit as many golden trophies and wilds as you can.

As we have already mentioned there are no bonus rounds in 20p Shot Slot, but the ability to score so highly in one spin is almost a bonus in and of itself. It’s rare to find a slot with such large prizes so easily accessible, all it takes is the courage to spin those reels!

20p Shot Slot is far from the most sophisticated pokie you’ll ever play, and though the visuals are decent if you’re a soccer fan there isn’t much in the way of features or bonuses to keep you entertained if that’s what you like. What this game does have is a huge jackpot, and we doubt there are many players who can resist a crack at that with so few symbols to match!