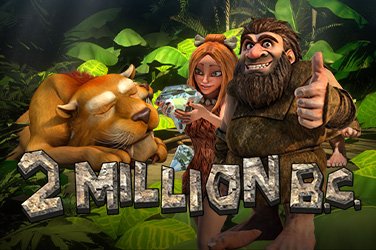 With 3 different bonuses available to make the most of, including a free spins game, you should check out this 2 Million BC slot game review!

Players will have been transported back to the Stone Age when they decide to give the 2 Million BC slot game a go, as BetSoft have taken clear inspiration from the theme.

The playing grid, which happens to follow a rather standard and traditional online slot game format of 5 reels and 3 rows, is set in front of the entrance of a cave that the characters used will clearly live in, whilst there are a number of leaves located on either side of the grid to help further enhance the visual effect.

During this 2 Million BC slot game review, it became apparent that this online video slot game is incredibly easy to play and follow. With a total of 30 adjustable paylines available to form winning combinations on, all you need to do is to land an identical combination of either 2 or 3 icons from left to right. Checking out the paytable will help provide all the information required.

Players can place bets from as low as $/€/£0.01 per spin if they alter the gameplay settings and put everything down to its bare minimum, or they are able to place a maximum bet of $/€/£150 on each spin that they make.

There are a number of different symbols available on the paytable of this 2 Million BC slot game from BetSoft, with the developer having provided some great artistic detail when designing the icons that are being used.

The low-value icons include the red gem and the vase, whilst these are then followed by items such as the carving of a mammoth, a necklace of rocks, a club, a wheel, a stone ruin, a prehistoric insect, a sabretooth tiger and a cavewoman. She can pay a handsome $/€/£2,500 when 5 of a kind are formed at the maximum bet level.

This 2 Million BC slot game has three special scatter and bonus symbols. These are represented by the burning fire, the acorn and the diamond.

BetSoft have provided players of this slot game with a number of great 2 Million BC bonuses that can help to increase the potential wins on offer.

The first of the bonuses that can be triggered is via the burning fire icons that can be found on the reels. If 3 or more of these appear, the free spins bonus game will be activated. More fires can also trigger further free spins throughout the duration of this bonus game.

The acorn symbol can trigger the Sabre Attacks bonus game when 3 or more of them appear on the reels. Here, the aim is to help the caveman knock out the sabretooth tiger cold by aiming and shooting at it. If successful, an instant reward can be achieved.

The Diamond Bonus is the last of the special 2 Million BC bonuses available in this online slot game, with 3 or more of them in a winning combination triggering the bonus. This mini game will require you to help the caveman to try and steal the diamond from the tiger by picking out a strategy to use. In addition, a winning sequence of 3 or more diamonds will also payout instant prizes, as well.

The return to player (RTP) rate for BetSoft’s 2 Million BC slot game stands at 91.94% and features a medium volatility level. Although the RTP rate could be considered a lot lower than the typical 96% that appears to be an average, the medium volatility means a number of frequent wins is possible to achieve.

This 2 Million BC slot game title from BetSoft contains everything a keen online slot game player could wish for as it combines three different bonus games with some simplistic gameplay action that is incredibly easy to follow and pick up.

With how good the 2 Million BC bonuses are and with a medium volatility level having been set, you should have more than enough opportunities to win some rather nice rewards!