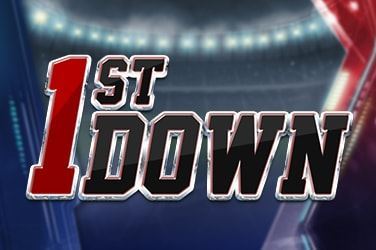 American Football might not be the most popular sport in New Zealand, but it’s got a global following and there are still millions of fans worldwide who can recite the team rosters off by heart and have a stash of jerseys in the wardrobe. Inspired Gaming have a bit of a habit of making sports pokies, and it’s historically been a bit of a hit and miss genre to play, but with some good pedigree behind it and a great looking theme on top, will 1st Down be the slot of your dreams or will it fail to make the cut? Let’s take a look in our 1st Down slot game review.

The 1st Down slot game isn’t officially licensed so there are a lot of look-alikes on display in the design, but we’re pleased to report that the game manages to capture that larger than life, all guns blazing world of American Football to a tee. The background of the reels is an enormous stadium, while the menu options in the foreground all look to have come straight from an NFL (National Football League) analysis show, which is a nice touch. The symbols themselves are the standard 9 – A alongside equipment from the sport including the ball, a helmet and players in different poses. There’s even a wild that looks very like the NFL logo!

The first thing you do in 1st Down is choose your team from a selection of eight with quintessentially American names like the Hawks, the Comets and the Bobcats, though you can change your team whenever you like. There are three rows and five reels to play on, while there are also 30 pay lines on which you can bet up to £/$/€100 per spin. The bonus round is the real money maker in this game, and the main game doesn’t pay all that well, but you can bag as much as 30x your stake if you land the logo of the team you chose five times, which is the most generous symbol. Don’t be disheartened though because the bonus round comes up trumps, as evidenced by the high RTP of 96.5%.

The main bonus symbol in this game is the gold coin which also has a multiplier on it from one to ten, which will apply to combos it is part of. Land up to five of these coins and you can trigger the bonus game, which really brings the theme to life. You’ll see a series of clips of your team playing, and depending on how they do you can make more cash! Each touchdown earns you 6x the combined value of the multipliers on the activating coins, while field goals earn 3x, and the game only ends when a pass is intercepted or you miss a scoring chance.

1st Down is a pokie that places a lot of emphasis on the bonus rounds, which could put some players off, but watching your team play and win you serious cash is a thrill few other slots can top! With a potential top prize of up to £/$/€250,000 there’s plenty to play for, and it’s heaven if you’re an NFL fan!