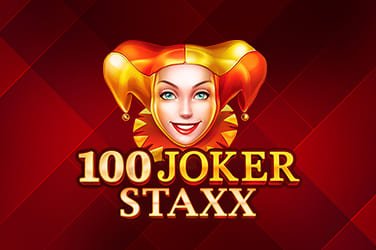 100 Joker Staxx is another fruit machine slot from developer Playson, with gorgeous-looking graphics that nonetheless maintain the traditional look and feel of a fruity. The big difference in all of Playson’s fruit machine pokies is that there is some central mechanic that changes every time, and in this one, the mechanic is stacked joker wilds which can provide potentially huge wins if they land favourably.

But is that enough to save this game from being just another fruit machine, or will this be one you come back to again and again? Let’s take a look at our 100 Joker Staxx slot game review.

If you’ve ever played one of Playson’s fruity games before then this will immediately seem familiar to you, but if you haven’t then be prepared for some lovely-looking fruits in 100 Joker Staxx. The background isn’t much to write home about, just a deep plum colour, but the symbols themselves look like oil paintings of the classic fruit symbols: Watermelons, grapes, oranges, cherries, plums, lucky 7s and stars are everywhere. They all shine brightly, with the fruits having little droplets of water on them to make them look extra juicy. That’s about it in terms of the visuals, and there aren’t many animations or sounds to talk about, but all the best fruitys are usually quite basic!

Also in common with most fruit machines the mechanics in the 100 Joker Staxx slot game are pretty traditional too, though you do get extra rows to play on, so you start with four rows and five reels instead of the usual three. This also means that you get 100 pay lines to play on, which is a nice upgrade to spend your £/$/€100 per spin betting limit on. The regular symbols in this game pay respectably enough but not well, topping out at 50x your stake for the lucky 7s, though the joker wild and the scatter both pay much better at 200x and 800x your stake for five of them respectively. It’s also important to remember that any symbol in this game can appear stacked, which is what you get instead of a separate bonus game, so you’ll be relying on this fact for big payouts. Still, the RTP is nice and high at 96.38%, so you can be pretty sure of returns!

The biggest bonus you’ll find in 100 Joker Staxx is the stacked jokers. These appear pretty regularly and most of the time you’ll be using them to complete combos involving other symbols, but the best combos happen when you land three sets of stacked jokers together to form a triple joker combo. Even better than that is the five joker combo, which can pay as much as 5000x your stake if they fill the screen, which is £/$/€500,000 at maximum bet!

100 Joker Staxx is a pretty classic fruit machine pokie in which the main game element is right there in the title. This game is a harsh mistress, and you can often go a long time with pretty mediocre wins, but it doesn’t take much to suddenly land a really big one! With a cool half-million just one spin away, how can you resist?